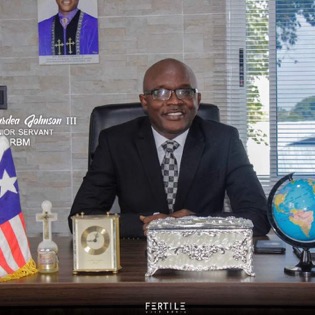 On his official social media page.

Bishop Johnson decried for a person to become Christian and at the same time a Muslim.

“No one can be a Muslim and a Christian at the same time, we do not serve the same God”, he indicated.

Bishop Johnson who is the spiritual leader of Liberia Vice President Jewell Howard Taylor noted that the Muslims are praying and worshiping different God.

According to him Christians should not be in both religions despite the government is encouraging religious tolerance.

Presently, there is an Interfaith Religious Council of Liberia that is inclusive of those of the Council of Churches and of the Muslim Council.

Moreover, the Liberian Government at the major national event gives the Muslim and that of the Christian to pray for an event with everyone accepting the prayer.

But in few hours when President George M. Weah attended the Independence Day’s Thanksgiving Service at the New Georgia junction Mosques with a Muslim dress code, Bishop Johnson came out with his comment “No one can be a Muslim and a Christian the same time we do not serve the same God”.

Bishop Johnson was criticized by the public recently during his investiture as Bishop of the Restoration Baptist Ministries for kneeling before President Weah along with other top bishops from around the world and Liberia.

Bishop Johnson did clarify that he was not seeking the prayer from President Weah as was indicated by his critics.

One of such person was the former Deputy Presidential Press Secretary to former President Ellen Johnson Sirleaf Abel Plackie who said the comment was laudable and well researched but indicated that the Bishop should stop speaking indirectly and be clearer like the sky.

Also, the Presidential Aide to President Weah, Sekou Kalasco Damora called on Bishop Johnson to leave such criticism for God himself.

But Yoowa Wordsworth thanks Bishop Johnson for being so bold to speak on what many religious leaders and advisors of the nation are afraid to talk on.

IRON GATE CHURCH OF CHRIST DEDICATES OVER $174K WORTH OF…