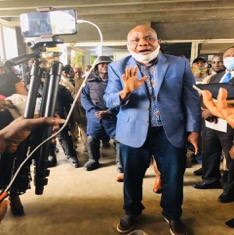 MONROVIA-The Minister of Finance and Development Planning has been blamed for the ongoing strike action by State lawyers across the country.

According to the Ministry of Justice, Finance Minister Samuel Tweah had refused to disburse funds to state prosecutors to ensure their appearance in court as well as enable them carryout their court functions smoothly.

Appearing Tuesday, May 18, 2021, to answer to an inquiry by Judge Roosevelt Willie of Criminal Court “C” relative to the recent absence of prosecution in court, Cllr. Sayma Syrenius Cephus, Solicitor General of Liberia claimed reason for such reported absence of prosecutors from court proceeding is far beyond the Ministry of Justice control as its borders on payment of salaries.

It can be recalled on May 17 Criminal Court A Judge summoned officials of the Ministry of Justice to appear in court to show cause why the court should not hold them in contempt for their prosecutors failure and refusal to appear in court upon receipt of notices of Assignment since the opening of the May Term of court.

Cllr. Cephus mentioned as enforcement arm of the Republic, they understand that the absence of prosecutors from court clearly undermines the authority of the court and that of the rule of law.

Similarly, the Solicitor General crave the indulgence of Judge Roosevelt Willie to expand the writ of Summon to include the office of the Finance Minister and lawyers to come and justify their action for delaying prosecutors salaries.

“This request and information is made in good fate and as the Ministry of Finance has not been funding the Ministry of Justice to pay the prosecution section, thereby creating the opportunity for prosecutors to appear in court,” Cllr. Cephus said.

Having listened to the MOJ on the matter in the contempt proceedings relative to the allegation by the Cllr. Cephus, the Court granted the MOJ request to have Minister Tweah appear before it.

With the latest situation, Judge Willie voiced they would meet as criminal Court’s Judge A, B, C, D & E thus acknowledging that all of the courts are experiencing the absence of the State Prosecutors.

The court reserve ruling on the contempt aspect as well as the prayer made by the Ministry of Justice to extend these contempt proceedings to the Finance Ministry and further that the ruling will be made on tomorrow, Wednesday, May 19, 2021.

Judge Willie told Journalists that the refusal of state prosecutors to appear in court have hampered normal workings and deny access to Justice to individuals who have cases at the court.

“Feces Floating All Over Our Rooms”

“Feces Floating All Over Our Rooms”