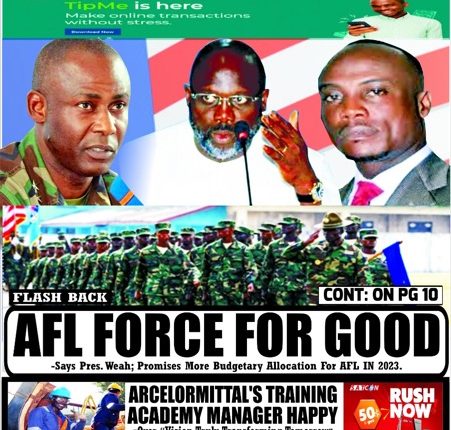 During, the graduation ceremony of the new batch of soldiers, President Weah narrated that the Government of Liberia has ensured regular increments in the budget of the Ministry of National Defense over the years.

“We will continue to see that the Armed Forces of Liberia receive the additional budgetary allocations necessary to continue its recruitment and training process in 2023, in order to augment the strength of the Force, he noted”.

He mentioned that it is important to note that the recruitment process represents a geographical balance of Liberia.

He furthered that the training process was conducted at four strategic and geographical locations Montserrado, Bomi, Bong, Grand Gedeh, and Maryland Counties.

“Let me also extend my gratitude to the 24 officer candidates presented here with us today, who are still undergoing training at the officer candidate school at Tubman Military Academy in Camp Todee, he noted.”

He mentioned that as professional career soldiers from diverse professional backgrounds (medical practitioners, engineers, administrators, and social workers) your men in arms will depend on you for guidance and professional leadership.

He also thanked and appreciated the graduates for volunteering to serve their country Liberia and to prepare themselves for the second phase of the officer candidates’ Training.

According to him. Liberia stands proud of the countless contributions of the Liberian Military to the peace and development of our country and the world at large.

He mentioned that our soldiers must be seen as, “soldiers of the people” as they perform their duties to the Liberian people.

“Let me assure you that my government is committed to providing, as much as is possible within our budgetary constraints, he noted”.

He stated, that every necessary support to ensure that the Armed Forces of Liberia is, and remains, a “Force for Good”.

He also thanked and appreciated the United States Government and other partners that have been supportive to the training of the Armed Forces of Liberia during his absence.

He expresses personal thanks and appreciation to the Defense Minister, Major General Daniel Doe Ziankahn, Jr., and The Chief of Staff of the AFL, Major General Prince C. Johnson, lll.; the AFL High Command, and the authorities of the Ministry of National Defense, for ably steering the affairs of the Armed Forces of Liberia.