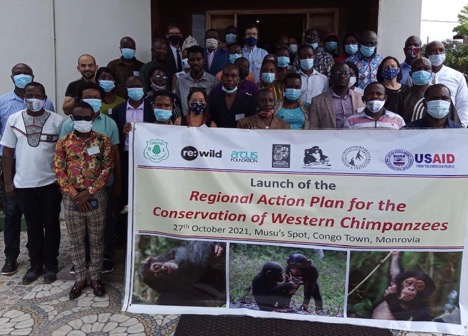 MONROVIA-A landmark one day stakeholders’ meeting launching West Africa’s regional action plan for the protection of western chimpanzees was held in Monrovia on October 27, 2021. The meeting, aimed at raising awareness and garnering commitment for the plan’s implementation was led by the Forestry Development Authority (FDA) and its collaborating partners.

The plan, covering the period from 2020-2030, was developed based on a workshop held in December 2017 in Liberia by all concerned stakeholders and other West African countries.

The plan, published by the Primate Specialist Group of the Species Survival Commission of the International Union for the Conservation of Nature (IUCN), aims to improve the protection of critically endangered western chimpanzees, one of Liberia’s most important flagship species. The western chimpanzee is one of four sub-species and only remains in eight countries in West Africa, with Liberia hosting the largest forest-dwelling population. Western chimpanzees are listed on the IUCN Red List as ‘Critically Endangered’ – the last step before extinction – meaning the species could soon disappear from the wild if radical and targeted measures are not put in place immediately and acted upon by all stakeholders.

The event was graced by concerned government institutions, concessionaires, diplomatic representatives, donors, conservation partners, academic institutions, and others, all present to ensure effective implementation of the action plan, which requires strong inter-sectorial collaboration. Stakeholders solemnly pledged, “That at all times and with available resources, we pledge and commit to promote, support, report and implement the regional Action Plan for the conservation of western chimpanzees (pan troglodytes verus) 2020-2030 in Liberia and across the West African region” and “We recognize the strategies, objectives and actions developed in the Action Plan which are attached to this pledge and hereby approve same as an evidence of support by the signatories to the pledge…”

FDA Board Chairman, Mr. Harrison S. Karnwea, Sr. read the pledge and implored stakeholders to be commit to the document which he described as an important quest for the protection of nature. Mr. Karnwea thanked stakeholders for their participation and collaboration in making sure that Liberia’s western chimpanzees, representing West Africa second highest population, are fully protected.

In his welcome statement, FDA Managing Director Mr. C. Mike Doryen expressed the support of His Excellency President George Manneh Weah, President of the Republic of Liberia, to the conservation of Liberia’s forest and emphasized the significance of the event given that the habitat of western chimpanzees and other endangered species are being rapidly destroyed and while poaching for bushmeat and the pet trades continue to deplete Liberia’s wildlife populations. “There is a need to work together closely to design effective and urgent strategies to save the world’s remaining chimpanzees populations from total destruction and to ensure the enforcement of Liberian and international laws and agreement protecting the western chimpanzees and other wildlife in Liberia.”

He referenced the National Wildlife Conservation and Protected Area Management Law and the Environmental Crime Section of the Penal Law as key elements of the legal frameworks protecting wildlife species and their habitats in Liberia, as well as international treaties to which Liberia is a signatory, such as the Convention on Biological Biodiversity and the Convention on International Trade in Endangered Species of Wild Fauna and Flora. Mr. Doryen thanked stakeholders for the marked spirit of enthusiasm and collaboration, something worth great commendation.

In remarks also UK Ambassador to Liberia Hon. Neil Bradley said his government is impressed and willing to support efforts geared at protecting the forest and all its constituent elements including endangered species. He promised to work closely with the FDA and its partners in achieving this fundamental objective.   Similarly, USAID representative to the occasion, Mr. John Pasch pledged USAID support to the process and hoped the stakeholders will live up to the commitment to champion the cause of protecting the remaining chimpanzees generation in the sub region.

During the series of technical sessions, the two focal persons on the project, Ms. Menladi Lormie, WCAP FDA focal and Mr. Clement Tweh, WCAP scientific focal concertedly made exhaustive presentations including the current status of western chimpanzees in Liberia and the threats facing them, the overview of the Chimpanzees Conservation Action plan, amongst others important topics. Other presenters were Mr. Blamah Goll, technical manager for conservation department at FDA who introduced the IUCN conservation plan and founder of Liberia Chimpanzee Rescue & Protection (LCRP) and WCAP rescue center and law enforcement focal, Ms. Jenny Desmond who made presentation on the crises situation facing the chimpanzees including illegal possession to rescue home. Dr. Annika Hillers, Country Director for Wild Chimpanzee Foundation, the organizer of the event appreciated the participants and committed WCF’s unflinching support to the process at all times during the life span of the project.

The event was supported and sponsored by the Primate Specialist Group of the Species Survival Commission of the IUCN, re:wild, the Arcus Foundation, the West African Biodiversity and Low Emissions Development (WABiLED)/USAID, the Wild Chimpanzee Foundation, and Liberia Chimpanzee Rescue and Protection.

US Embassy Donates US$19,370 Equipment To LNP