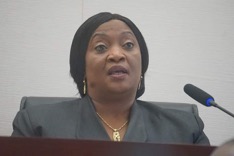 MONROVIA -Liberia’s first female Vice President Chief Dr. Jewel Howard Taylor has strongly condemned the recent ban placed on two high schools in the country by the Ministry of Education through its Minister, Ansu Sonii for hosting a graduating ahead WASSCE results in the Country.

Recently, the Ministry of Education has banned the Haywood Mission School and Ricks Institute for time indefinite following constant violations of regulations set by the Ministry to guide schools operating in the country.

According to the Education Minister, the two well-known and historical institutions have operated in the country for a very long time but they persistently violate the ministry’s prescribed rules in terms of graduating students.

Minister Sonii revealed that the two schools have been fined over two times for putting out students before the official release of WAEC results which is a major requirement for graduating students.

The minister maintained that the Leo Sampson Haywood Mission and the historical Baptist school Ricks Institute results from the just-ended WASSCE have been withheld and all students from said institutions should proceed to the WAEC Liberia headquarters to have access to his or their result.

But speaking during the opening of the 5th Session of the 54th Legislature Monday, January 10, 2022, on Capitol Hill, VP Taylor called on the Ministry of Education not to use WAEC or WASSCE results as a basis for graduation in the Country.

According to the Liberian Vice President, the current punishment against the institutions of learning that have graduated students before the release of the WAEC/WASSCE results is a problem for not only both institutions but also their students.

Madam Taylor’s statements come days after the MOE banned some schools for three years from writing the national exams, including the Risk Institute and Haywood Mission High School for allegedly graduating students before the WASSCE results.

The former Bong County Senator argued that since a failure in WAEC/WASSCE does not call for a student to repeat the 12th grade, but rather do re-sitter, it should not also prevent any student who has successfully passed the 12th grade from graduating.

Since the pronouncement by the Education Ministry, there have been mixed views from Liberians, many of whom believe that the ministry action will not yell any fruitful results.