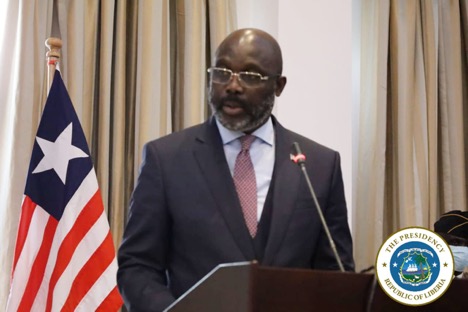 MONROVIA-The continual struggle by persons with disabilities across the country   will soon by a history if the commitment by the Liberian leader to become a reality.

Addressing the first National Disability Summit and   the International day of Persons with disabilities organized by the National Commission on Disabilities (NCD) at  the Ministerial Complex in Congo Town Over  the Weekend, president George Weah gave his fullest support indicating  that his administration will continue to strive to improve  the condition of  those living  with disabilities.

“I am here today to give you my fullest support. My Administration will continue to strive to improve the conditions in Liberia under which persons with disability must live.  This will involve further facilitation of the work of organizations working in the sector, including the National Commission on Disabilities, which is overseen by Vice President Taylor in her capacity as Chairperson,” he noted.

According  to  the Liberian leader, the  country has witnessed a significant increase in the number of disabled people since the end of the civil war, with many laboring at the lower end of the economic ladder.

He said such condition cannot be allowed to continue. “We must be deliberate in providing the social services you need in the same manner that we support your able-bodied counterparts. No one should be left behind, or left out”.

President Weah further  indicated  that there must be equal access to health care services, education, and employment opportunities for all, including the disabled emphasizing were  those necessity  are  is lacking, the government  will begin to take the necessary corrective steps to restore  those  basic and fundamental rights.

“This first national conference convened especially to address your special needs, presents a perfect opportunity to highlight your plight for the world to see.

Such Once again, I want to thank you for giving me this opportunity to be here with you today.  This will give me more ideas about how my Administration can better serve you.

Let me wish you success in your deliberations here.  I hope that this Summit Conference will produce positive outcomes that will bring genuine, sustainable, and positive change to the lives of the disabled in Liberia” president Weah said.

“I fully concur with that statement because it is my belief that people with DISABILITIES have the ABILITY to contribute positively to the growth of our society”, he said.

“While we are all challenged in different ways, nothing should be allowed to preclude one from aspiring to reach his or her God-given potential,” he  added.

President Weah during  his deliberation, he  reflected   on  his support  to a member  of the disability community  by asserting  that earlier this year, I gave an award to  a man for being the best in the field of one of the most physically-demanding tasks in Liberia: Farming.  His name is Konah Kermi, and he won the Best Cassava Producer award at the Agriculture Fair in February, despite being physically challenged”.

He however highlighted  that  there are other persons living with  who  is like  Konah Kermi  in  their various communities, stressing  that they are those men and women who, regardless of disability, constantly struggle to make a better life for themselves and their families; noting  that  their stories are true examples and illustrations of the determination and resilience of the human spirit.

Also speaking during the event The United States Ambassador to Liberia Michael McCarthy committed his government to advance in the human rights of person living with disabilities at home and around the world.

According  to  him,  the government and people of the United States of America showily  believe that with  the Government and people of Liberia  that  it is essential  to engage  persons with disabilities in a democratic process  to combat  the discrimination  and  to protect  the rights  of the disable  and show  their inclusion in  all facts of life in equal basic  of people.

For his part  the European Ambassador to Libera, Laurent Delahousse urged  the stakeholders not  to politicize the  National Disability Summit.

According to him, the national disability summit should be call super ability to develop and basically to compensate them of those parts of their bodies that are not working, including census on how to manage and to mitigate and to integrate  stressing that they need the needy support.

He affirmed the European Union’s commitment to support the disable community in meeting their basic needs through the partnership with the Liberian Government.

However Monrovia City Major Jefferson Koijee said it was vital for stockholders to fully participate in such a historic event relating   to persons living with disabilities.

According to Major Koijee, some of the country talented citizens are conforted with such a situation to be disable.

He urged those confronted with disability to keep on believing within his or her self in competing with those who are not disabled because of their intellectual ability.

For her part, the Chairperson and Executive Director of the National Commission on Disabilities (NCD) Daintowon Domah Pay-Bayee  extolled president George Weah  for  granting her  the opportunity  to serve  her people  including   supporting  her administration  to meet  the needs of person living with disabilities.

According to her, the event was intended to create awareness on issues affecting persons living with disabilities.

She said the day was also intended to showcase their talents and potential to the world that indeed disability is not inability.

Amb.    Pay-Bayee however paid tribute to the United Nations for adopting the treaties on the rights of person living with disabilities   with the Liberian Government also working in line with the international community to establish act through the National Legislature for   the establishment of the National Commission on Disability  that have been supportive  by the Government since 2005.