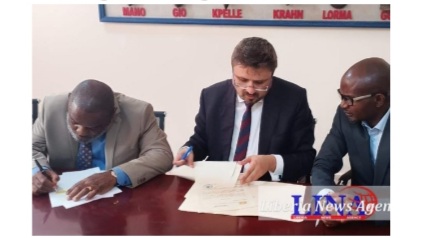 The Liberia News Agency (LINA) through the Ministry of Information, Cultural Affairs and Tourism (MICAT) has signed a partnership agreement with the Bulgarian News Agency (BTA) to develop and strengthen cooperation between the two agencies.

The agreement, which focuses on several cardinal issues, seeks to enable both agencies to share and publish daily news contents (text and photos) on their respective distribution channels with free reading by all visitors to the sites with explicit reference to the sources.

During the signing ceremony at MICAT Thursday in Monrovia, the Director General of BTA, Kiril Valchev, emphasized that while the partnership will enable both agencies to exchange and publish news contents, it also provides for the exchange of professional visits of journalists and other professionals from the sphere of media.

“I asked my colleague to sign an agreement on behalf of my Ambassador to start with three points,” he said.

Valchev noted that the first point is to exchange information, adding that without information it is not possible for business, tourism, among others, to adequately flourish.
The second point, according to him, is to aid both agencies to be editors of each other.
“We have global agencies, they will choose one news from Liberia per week or month and the same also with Bulgaria,” he added.
“This way,” said Mr. Valchev, “we will have a total of 3,065 news from Liberia in Bulgaria every year.”
According to the BTA boss, his agency produces 1,000 news stories per day and 3,000 photos daily, adding, “So if LINA produces 60 news stories per day we would be having 1,060 news stories per day.”
He believes that information is needed every day, while emphasizing that the agreement focuses on additional important points.
The Director General of BTA further emphasized that the third point of the agreement will focus on the exchange of journalists to cover and report events from both countries.
“We will host one great event by September this year and we will invite and expect journalists to cover and report on the event,” he said.
Valchev disclosed that BTA has recently signed a similar partnership agreement with the news agencies of Nigeria and Ghana.

He lauded LINA for the level of work being done and urged the agency to continue to do more, adding that the agreement will benefit both agencies.

Meanwhile, signing on behalf of LINA, Information Minister Ledgerhood J. Rennie appreciated the envoy and assured that a cordial working relationship between the two agencies will be cultivated.

Minister Rennie informed the partners that their visit had been initiated at the time Liberia is celebrating 200 years of freedom and leadership in Pan-Africanism.

He, at the same time, provided a comprehensive overview of the history of the formation of Liberia to his guests.

“This year we were happy to explore new areas of friendship and cooperation as we celebrate our bicentennial, so we are happy that you are asking for this relationship because we live in an information age,” said Minister Rennie.

Currently, Minister Rennie noted, the world depends on the tools of communication and information to determine daily activities, including public policies, health as well as education.

He added: “Everything that we do now is determined by the kind of information that we receive through different platforms.”

According to him, the Liberia News Agency is a hub through which information is disseminated across the country, however, the agency which went into decline due to the civil conflict, is now in a state of rejuvenation and that the Ministry is putting into place mechanisms to ensure that the agency becomes what it used to be in the past.

“Since he became the Director General of the agency, Mr. (Kwame) Weeks has been very magnificent in exploring new grounds and opportunities to make the agency second to none in West Africa,” Min. Rennie stated.

He thanked BTA for initiating the agreement and noted that the Agency looks forward to its implementation.

The Bulgarian New Agency (BTA) is the main source of information for the Bulgarian media and the country’s governmental institutions.

LETTER TO THE DEAD