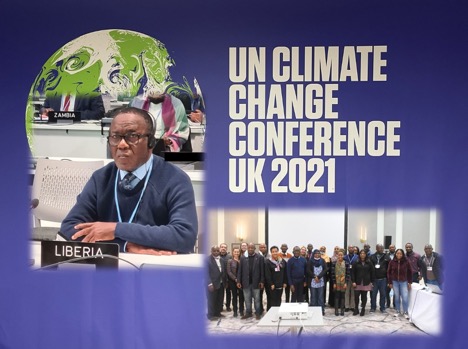 GLASGOW, Scotland – The Liberian delegation at the United Nations Climate Change conference (COP26) being held in Glasgow has organized a one-day workshop for African Countries attending the Conference on Article 6 of the Paris Agreement.

The workshop which was held at the Marriott Hotel in Glasgow supported by Conservation International (CI) aimed at discussing the status of Article 6 of Paris Agreement and the African Group of Negotiators positions. It was attended by 31 delegates of African countries attending COP 26, representing Liberia, Senegal, Nigeria, Gabon, South Africa, Botswana, Eswatini, Zambia, Tanzania, Kenya, Sudan, Uganda, and Rwanda.

He noted that Africa has two major ecosystems, one of which is very vital to the world’s retention of hydrocarbons and the reduction of greenhouse emissions – the Upper Guinea Forest. Hence, the need to be mindful of how carbon markets are operationalized under the Paris Agreement through Article 6.

He urged the participants at the workshop to ensure that political decisions are taken at COP 26 to ensure success for African countries.

Article 6 offers a path to significantly raising climate ambition or lowering costs, while engaging the private sector and spreading finance, technology and expertise into new areas. It offers three separate mechanisms for voluntary cooperation towards climate goals. Two of these are based on markets and a third based on non-market approaches.

The workshop was facilitated by the African Group of Negotiators Lead Coordinator on Market, Mr. Mbaye Diagne, who provided an overview of the status of Article 6 and the outlook for COP 26.

According to him, Member Parties have been working since Marrakech in 2016 to prepare the guidance on Article 6. All other guidance for implementing the Paris Agreement was agreed in Katowice in 2018 except Article 6 guidance. Article 6 guidance is the only missing element of the “Paris Rulebook.”

In 2019 in Madrid, Parties were close to reaching agreement and adopting Article 6 guidance, but failed in the final hours due to irreconcilable disagreement on three outstanding “crunch” issues on Article 6:

Parties at the workshop added that at this stage in the negotiations, it’s clear that a political “deal” is needed. Parties must think creatively about diplomatic deals that can be made outside of the climate negotiations.