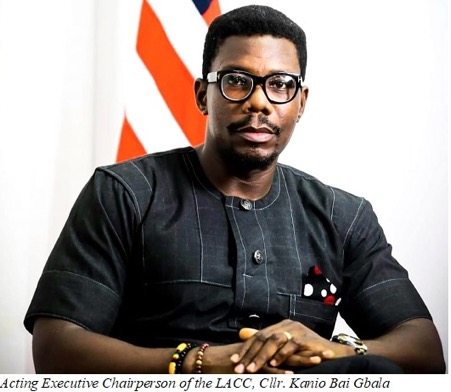 MONROVIA- Cllr. Kanio Gbai Gbala has commenced  the chairman of the Liberia Anti-Corruption Commission-LACC for the level of professionalism exhibited  in handing the   allege case of corruption against him.

In a  communication addressed to   Cllr. Edwin Kla Martin , Cllr. Gbala  wrote: “I take this time to thank Cllr. Edwin Kla Martin and the professional men and women of the Liberia Anti-corruption Commission (LACC) for the expeditious manner in which they have proceeded in the handling of the investigations of the NPA/Port of Buchanan Saga.”

He added: “Most of you will recall that when allegations of conflict of interest were made against my person about a month ago, I voluntarily elected to take a 1-month leave of absence from the LACC to engender a space of void of bias for the investigation. As I write, I am still on leave.

After undergoing a rigorous month long investigatory process, the LACC with foresight and diligence has decided to forward the evidence of the matter to the Ministry of Justice for further investigations in order to further preserve its integrity.

I wholeheartedly welcome this development and am very much available to aid the Ministry of Justice in its investigation.

I am also glad that the investigation has moved to an impartial party thereby providing me the opportunity to return to work at the LACC on matters that are separate and distinct from this investigation.

We again use this medium to reassure everyone that I am confident that I will emerge from this process vindicated.”