FGM Should Be Based On Consent, Not Force 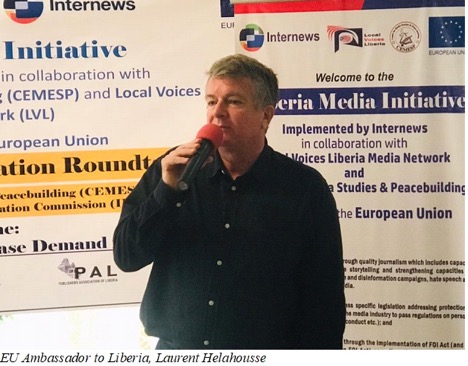 MONROVIA-Conversations around Female Genital Mutilation (FGM) in Liberia have always dusted huge debates as some have considered it as depravation of the culture, while others have turned it as violation of right of a female to fully experience womanhood.

The debate has again been raised by European Ambassador accreted to Liberia, Laurent Delahousse as Liberia joins the rest of the world to celebrate 16 days of activism for the girl child.

Speaking Thursday on State Radio, the EU envoy said FGM practice in Liberia should be based on consent and not by force.

Amb. Delahousse said forcing a girl child  into the traditional bush school, is a violation of te right of a child.

The EU Ambassador recognized that traditional culture, adding that it is important because it shows the sense of belongingness, but he was quick to point out that there are some of the practices that are very harmful and when it violates the right of a person, it has to change.

He was blunt with words when he said the harmful traditional practices in Liberia is Female Genital Mutilation; adding that it has to stop.

“This is something that needs to change,” he said with more seriousness of tone.

According to him, depriving a girl child of the full potential of a womanhood is what he termed as horribly harmful for the girl, horribly wrong and it has to be illegal.

Furthered, the EU Diplomat said they have started conversations with the Liberian government on how to put an end to mutating females’ sexual organs.

He acknowledged the reality that it is something difficult to do, taking into consideration the social, culture, economical and traditional values attached to the practice of FGM, but  in times with persuasion and having a deeper conversation with the people, the change will defiantly come.

He indicated that they are going to use a rather persuasive means than repression because, the issue about FGM is a dedicated one that needs time to embrace change.

For the next 16 days, serious discussions to end violence against woman and girls will be carried out by different right based groups.

The intention is to create a culture of violence free society, to ensure that woman and girls are treated as equal human without being underestimated or treated as though they are lesser humans created by a lesser god.

This year’s observance of the 16 days of Activism is under the theme “Enough is enough! Let’s act now to end violence against women, girls, children and other marginalized groups.”

The official celebration for the 16 days of Activism started yesterday, November 25 and is expected to end December 10, 2021.

Sleeping On the Street to Be Enlisted In AFL