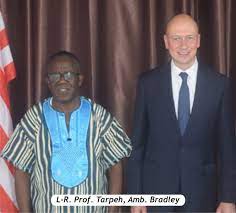 MONROVIA-Ahead of the upcoming global Climate Change Conference dubbed Conference Of Party (COP26) in the United Kingdom, an official of the British Government has made a clarion call for global actions on the climate in order to avoid a more disastrous outcome in years to come.

British Ambassador accredited near Liberia, Neil Bradley is of the strongest belief that a demonstrated urgency on the parts of leaders of the world would go a long way in averting greater climate change impact on the world.

Ambassador Bradley urged leaders to demonstrate high degree of urgency in tackling climate change, saying “human activity is damaging the earth and if the world does not act now.”

Quoting from scientists, the British envoy emphasized: “the science tells us the effect will become more frequent and more brutal.”

Speaking at the end of a three-day National Climate Dialogue organized by the Environmental Protection Agency (EPA), the British Ambassador said greenhouse gases inhabitants have been pumping into the atmosphere since the industrial revolution are altering nature’s precious balance.

In all that the earth is going through now, the Ambassador said it is not a choice between clearing up the environment and growing economics, noting that “Clean growth presents the most significant economic growth opportunity of the 21st century”.

Referencing the upcoming COP26, the Ambassador said it will provide an opportunity for the world to come together and commit to urgent action.

“We want all countries to come forward with ambitious nationally determined contributions and long-term strategies to reach zero carbon emissions as soon as possible” the British Ambassador indicated.

Amb. Bardley said developed countries have the responsibilities to lead on climate change action, specifically singling out major economies must pay their part.

The UK envoy who spoke of the pains under-developed countries go through to face the effect of climate change, said “Developed nations should imagine what it is like for communities on the frontline of climate change, struggling to deal with a crisis they did not next to nothing to create.”

He furthered that to feel what it is like to see developed countries invest trillions overnight to address the Covid-19, whilst the $100 billion a year that they have promised to support developing countries to respond to the crisis remains uncertain.

“The UK is playing its part, doubling our international climate finance to 16 billion over five years” he said.

He added that as donors, they must all keep their obligations and deliver on the $100billion, stressing that without adequate funding, the task ahead might not be possible.